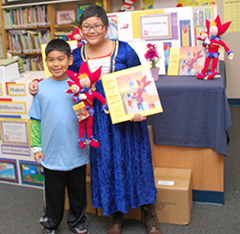 When Amber Delos Santos walked up to say hello, she looked as if she had just stepped out of The Jester Has Lost His Jingle. Dressed in a medieval costume as part of her school’s celebration of characters in literature, she looked like she and The Jester & Pharley lived in the same kingdom.

The Gauer Elementary 6th grader from Anaheim, CA, had been coping with leukemia since 2nd grade. And she was not having an easy time of it.

Our Reading Makes A Difference program brought us together. Megan Brown, Amber’s teacher at Gauer, called to see if we could bring the program to Gauer so that Amber’s friends could participate in a Read-A-Thon in her honor. They wanted her to know how much they loved and admired her and they wanted to help other children fighting cancer.

“ The assembly was definitely a hit,” said Principal Debra Schroeder. It was the first time I had participated in a closed-circuit assembly. It took place in the library and was beamed to every classroom. The air was electric in the library where all the sixth graders sat with Amber, her brother, Mazen (a first grader), and her mother Leilani Delos Santos.

At the end of the assembly, I asked Amber to come forward so I could present her with a special copy of The Jester Has Lost His Jingle and a Jester & Pharley Doll. Her classmates rose in a standing ovation, clapping loudly. She smiled her beautiful smile. And we hugged. That was the last day of February.

We met again in April, after Gauer students had read 228,245 pages in three weeks to give Jester books and dolls in her honor to patients at CHOC Children’s Hospital in Orange, CA. The Read-A-Thon was generously sponsored by The Noble Foundation.

“As you can tell, our students are deeply connected with Amber and what she is experiencing,” said Dr. Schroeder. “Finding a way to demonstrate their love for her through the Reading Makes a Difference Program will help them cope with what is occurring. And, I sensed it made Amber feel the love.”

Amber also felt the love of her entire school and community at The Jester Recognition Assembly on April 17, 2014. She was presented with a Certificate of Recognition by Anaheim Mayor Tom Tait and honored with a State Assembly Resolution from Assemblymember Al Muratsuchi, from The Jester’s 66th district.

Later in the semester, the Anaheim City School District Board of Education asked her to speak about her experiences as a cancer patient. Mayor Tait gave her a special tour of City Hall.

When she returned to CHOC for treatment over Mother’s Day, The Jester & Pharley Doll always curled up with her.

In June, she mustered all her strength to leave the hospital, put on a bright orange dress and joined her classmates for graduation. She sang a Whitney Houston song on stage during the matriculation ceremony from 6th grade to middle school.

But Amber could not join her classmates in middle school. She died on July 9, 2014 – having touched many, many lives deeply, including mine.

Since The Jester’s release in 1995, I’ve met many children coping with cancer. I remember them all. But Amber always will have a special place in my heart.