Before attending Yale University, David went to Chadwick School in Palos Verdes Peninsula in California. It was there that he began his career as a cartoonist with a comic strip called “The Chadwick Chronicles” in which he regularly parodied student life for the school newspaper.

He also drew editorial cartoons on local, national and international issues for a Los Angeles Times publication distributed to Southern California high schools. He was editor of the yearbook and a recipient of the Citizenship Award and Drama Award. 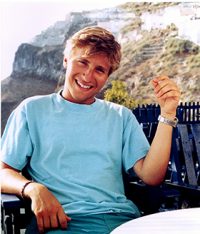 The best we can do is live life,

enjoy it and know it is meant to be enjoyed –

know how important and special every time … moment … person is.

And at the end of the day, say, “I have enjoyed it,

I have really lived the moment.”

That is all. All is that.

Is. Is is such a powerful word.

At Yale, he adapted his character “Pops” into a weekly cartoon strip that chronicled the life of a fictitious Yale professor. He also spun off “Pops” into a series of Yale Academic Calendars and drew weekly editorial cartoons for the Yale Daily News and the Yale Herald. During his senior year, David was diagnosed with Hodgkin’s disease.

For the next year-and-a-half, he kept a comprehensive journal of his thoughts and feelings while working on The Jester Has Lost His Jingle as senior project in art and English. Academy Award-winning animator Faith Hubley, a senior critic in the Yale School of Art and one of David’s professors, said about David’s creations, “The Jester and Pharley are extraordinary characters, at once poignant and humorous.”

In his journal, David wrote in November, 1988, that his friends might feel pain at his leaving, but not he, “for I would be like a seed planted in all of them, and when they would think of me, my memory, my spirit, I would blossom again, live again, be with you again, love you again and be alive within you.” 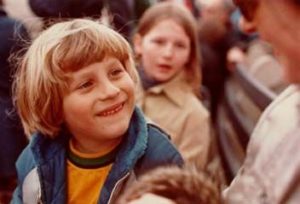 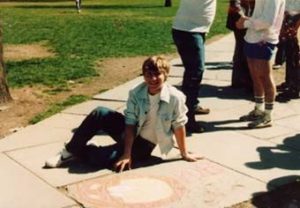 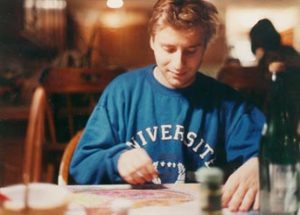 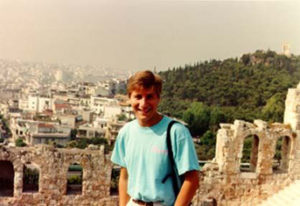 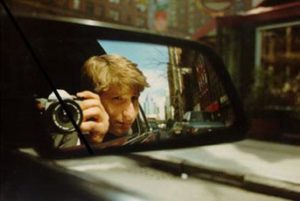 Author's Note from The Jester Has Lost His Jingle 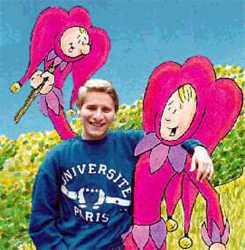 One day during the summer, I walked into the classroom in a very good mood. I was very happy, whistling as I walked. When I arrived into class, I made a silly joke. And nobody laughed. Everybody else was in a horrible mood, caught up in their own lives, their own work, their own problems.

Now I knew that the joke was not very funny, but nobody even smiled or said hello. They just kept to themselves and looked down at the table. My good mood soon became one of depression, rejection and disappointment. I decided to sit silently like the others, thinking to myself how quickly moods change.

I started drawing and, as usual, did not know what I was creating, letting my hand create on its own accord. It turned out to be a very sad-looking face, humped over, trying hard to carry its own weight. I randomly added triangles to his head and, after staring at what I had just made, realized that it looked like a little jester. I added the words next to it: “The jester has lost his jingle.”

And thus, the Jester was born.

“The Jester came to help me in my time of need,

and my hope is that, if you let him,

he will come alive within these pages

It is rare for a character of your own creation to come to your aid. Yet, my Jester did just that. During the fall of my senior year at Yale, I was diagnosed as having Hodgkin’s disease, a cancer of the lymphatic system. Upon hearing the news, I went out to a patch of lawn, sat by a tree, and cried.

As I sat there crying, I listened to my sobs, thinking how much they sounded like my laughs. And suddenly, one of the lines I had written during the previous summer popped into my head: “Here I lie, I have a tumor. . .And you ask me where’s my sense of humor?” And that was when my Jester came to me. He literally walked over to me, put his hand on my shoulder and with a concerned look said, “David, how come you’re not laughing? Your cries sound just like laughs, so why not laugh instead of cry?” I thought about it for a second and then repeated the question to myself: “How come I’m not laughing?”

So I got up from the pile of dead leaves that surrounded me, wiped my face dry of its tears, and walked off laughing at how silly and scary and wonderful this world of ours is.

He came to help me in my time of need, and my hope is that, if you let him, he will come alive within these pages and help you too.©

In Loving Memory of David Saltzman 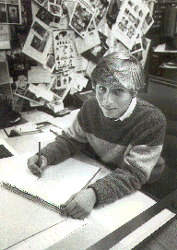 On a warm Sunday afternoon, we sat in the outdoor amphitheater of his school and said a long goodbye to David Charles Laertes Saltzman, who died a few days ago, just short of his 23rd birthday, of Hodgkin’s disease.

In the nature of things, we are reconciled to losing our parents, as they lost theirs before us. And as painful as those lessons are, we have to accept them as inevitable reminders of our own place in a chain of life that links us to a long unknowable past and an unknowable future. But we may have a consoling sense of our own continuity in watching our children and even our children’s children come along.

What you can never be prepared for as a parent, because it is unthinkable as well as unbearable, is the loss of a child, especially a child who has survived all the hazards of infancy and adolescence – the whooping cough and the bicycle accident and the fall from the swing – and arrived safely, triumphantly at adulthood.

David had reached adulthood about as triumphantly as you can in this society without being directly recruited for the Dodgers or the NFL. He’d been performing, acting, singing, dancing, since grade school, a lively, likable extrovert. He was a writer, a poet, a cartoonist. He organized a group at his Chadwick School to entertain at nursing homes or wherever else some lively brightening-up was called for. He organized Safe Rides at the school, which ferried home teen-agers who weren’t in shape to drive, or passengers who’d been stranded by their over-partying dates.

He edited the school yearbook and took Chadwick’s top honors for citizenship and service. (He’s also been on the honor roll every term since kindergarten.) At Yale, David cut much the same kind of trail, doing among other things a popular cartoon feature for the Yale Daily News, satirizing the faculty and campus doings through a professor who looked from time to time suspiciously like David’s father, Joe, a professor at USC. 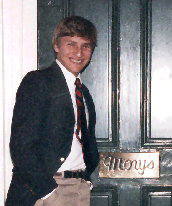 We watched it, and many another moment from David’s life from infancy forward, through the magic of videotape. Joe Saltzman, who teaches about documentaries, demonstrates that documentary can begin at home. What’s obvious is that even for non-professionals, the video camera, and now the ever-lighter camcorder, is going to seize memory in a way that faded photographs and even home movies never could.

Yesterday’s baby, naked on the bear rug (to his or her later-life embarrassment), is now the undraped child, striding about, at once mischievous and sublimely innocent.

The triumph of the Yale graduation was shadowed. David had already been diagnosed as having Hodgkin’s, and was already launched on his hard 18-month struggle against that mysterious and finally unyielding enemy. 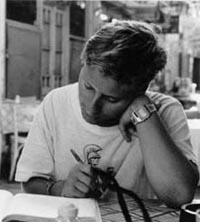 It was a back of the hand from the fates that felt as random, capricious, unfair and incomprehensible as the blows of fate ever feel. The why of it seemed unanswerable.

I don’t know that there’ll ever be an entirely consoling or satisfactory answer. Yet it has to be said that tragedy became an opportunity. Under the sentence of death, David turned out to be as exceptional as he had been when life was a larky adventure, the world was an excitement and the future stretched before him as a series of wonderful possibilities.

He kept a journal, and Sunday afternoon several of his friends took turns reading from it. I hope it will be published one day. David took his illness, and the likelihood of an early end to his promising life, not as a defeat but as his biggest and finest opportunity to help those he loved, and indeed those he didn’t know but who might come to know him. 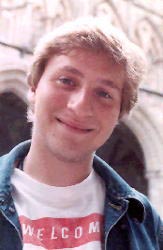 His favorite verb, I think, was “to soar,” and he did his best to encourage his friends (and to prepare himself) to soar above daily trials, not least his own tethering bonds of pain and uncertainty.

During his illness David not only kept the journal, he also wrote and illustrated a children’s book, The Jester Has Lost His Jingle. His ultimate ambition had been to do children’s books. The book, it is clear, was a metaphor for his own struggles not to surrender to the despairs of his cruel situation.

He also created a calendar, with a cartoon for each month and some wild birthdays and uncommon celebrations noted. Is March 31 Bunsen Burner Day? David’s calendar – a characteristically generous gift to his friends – says it is, and hereafter, if not before, it therefore is.

Many of us here at this newspaper followed David’s heroic struggle with close concern because his mother, Barbara Saltzman, is the editor of the daily Calendar section. She and the family, including David’s older brother, Michael, have presented a profile in courage that complemented David’s own.

Sunday afternoon, Norman Corwin, a family friend who is Joe Saltzman’s teaching colleague at USC, read The Jester Has Lost His Jingle in the fine warm voice millions admired when Corwin was doing his pioneering radio verse plays.

Whenever I feel like crying, I smile hard instead.
I turn my sadness upside down and stand it on its head.
When I get sad or lonesome or when I get depressed,
That’s when I sing my loudest and dance my very best.©

Contemplating his own death with a philosophical serenity remarkable in a man so young, David told his journal in November, 1988, that his friends might feel pain at his leaving, but not he, “for I would be like a seed planted in all of them, and when they would think of me, my memory, my spirit, I would blossom again, live again, be with you again, love you again and be alive within you.”