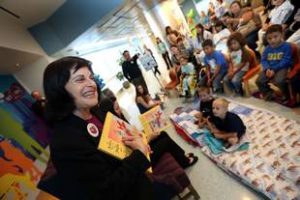 The Jester Has Lost His Jingle/El Bufón ha perdido su gracia, serves as inspiration for young patients to rediscover their smiles.

It’s taken more than 17 years for The Jester Has Lost His Jingle to be transformed into the bilingual children’s book El Bufón ha perdido su gracia. Now this special bilingual book will be able to inspire laughter in children with chronic illnesses, such as cancer, with its beautiful message in Spanish.

That’s exactly what happened Thursday at Miller Children’s Hospital Long Beach, where the acclaimed book was presented for the first time in Spanish, with a bilingual reading to more than a dozen young patients. The book reading put many smiles on the tired faces of these young children.

One of the children was 9-year-old Diego Reyes who was diagnosed with a brain tumor in January of this year. He appeared visibly tired and weak from the treatment he had been receiving at the hospital. He has lost his hair, but not his ability to laugh, as he demonstrated during the reading of each colorful page of El Bufón ha perdido su gracia.

“David’s idea was that every child could laugh in spite of pain, and he wrote and illustrated this book with that spirit of joy he had for life,” said Barbara Saltzman, mother of the book’s author, David Saltzman, who wrote The Jester Has Lost His Jingle in 1989, a year before he graduated from prestigious Yale University.

That same year, David was diagnosed with Hodgkin’s disease, or lymphatic cancer. It was then that David put all his effort toward creating a story of a Jester who can help people laugh and enjoy life despite adversity.

“The best we can do is live life … enjoy it…and know how important and special every time…moment…person is,” David wrote about life, which he lost to cancer in March of 1990, at 22 years of age.

In high school one of the things that David most enjoyed was tutoring Spanish-speaking elementary students near San Pedro whose first language was Spanish, remembered Saltzman. “He would have been so happy to see his book translated into Spanish. “The Spanish language and Hispanic culture are part of our family life and very much appreciated,” she added.

Saltzman, who was an editor at the Los Angeles Times, stressed how important it was for the whole family that the book’s translation into Spanish be literary, in rhyme and retain the spirit of the story. That’s why it took so long to publish the story in Spanish. It was not undertaken until we met Natalia Aurrecoechea, who offered to do the translation, and did it so marvelously,” said The Jester’s Mom of the Basque scholar’s translation accomplishment.

The result of the Saltzman family’s passion to fulfill David’s dream to the letter is a bilingual children’s book that not only achieves the highest literary standards but also completes its mission to bring laughter to children and adults, who cope with difficult times, such as illness — in both languages.

“It is a good book for young people facing a serious illness because it was written by someone who suffered such a disease. It is filled with optimism,” said Dr. Jerry Finklestein, an oncology pediatrician at Miller Children’s Hospital Long Beach.

More than 60 percent of the patients are children of Hispanic origin.

In addition to a smile, for patient Natalie Flores, the book sparked a taste for reading. “I don’t like to read much, but I enjoyed everything about this book,” said the smiling girl while hugging the book she was given.

PrevPreviousSee How The Jester Helps Kids Cope With Cancer
NextL.A. Times Festival of Books 2015Next