Mother’s Day admittedly isn’t easy for Barbara Saltzman, or for any mother who knows the pain of losing a child.

But this year, 25 since the passing of her son David to Hodgkin’s lymphoma and 20 since the publication of his award-winning children’s book, The Jester Has Lost His Jingle, was different.

Hours into the morning, Saltzman was flooded with heartfelt emails from strangers across the country bound by her son’s enduring message of finding hope and laughter in the darkest of times — a message highlighted in a Mother’s Day-themed “CBS Sunday Morning” segment titled, “A mother’s promise.”

“The notes we have received, they have been really, really touching. I haven’t caught up with them and I’m having to learn to Tweet,” she said, a few days after millions tuned in to the program. “It has been so gratifying on so many levels this Mother’s Day, it’s been really a fantastic gift.” 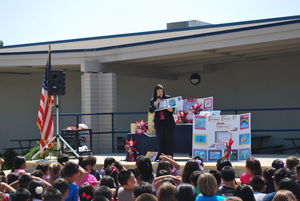 Saltzman, a former Los Angeles Times editor, her husband Joe, a journalism professor at the University of Southern California, and their TV writer-producer son Michael were interviewed last month by CBS correspondent Tracy Smith in the backyard of their family’s home in Palos Verdes Estates.

The Saltzmans knew the CBS segment would instantly broaden the Jester’s reach, but something else happened that they weren’t quite expecting: They realized that their son’s book, now older than its author’s lifetime, had gained a following wider than they ever knew.

David wrote and illustrated the 64-page story — about a court jester and his side kick, Pharley, who embark on a search to return missing laughter to their kingdom — for his senior project at Yale University. The 22-year-old read the book to children in the hospital while he underwent treatment himself. He died in March 1990, nine months after his graduation. David’s family made a promise to publish his book and give it free to every child with cancer in the United States.

Saltzman published the book herself in 1995, quit her full-time job and later formed The Jester & Pharley Phund, a nonprofit dedicated to promoting literacy and sharing the book with children fighting not only cancer, but obstacles of all kinds.

To date, she says there are at least 325,000 copies in circulation, many donated to hospitals and schools through the nonprofit’s Reading to Give and Reading Makes a Difference programs.

The Jester & Pharley Doll came out in 1996 and a bilingual English and Spanish version of the book followed. Now the nonprofit is working on an e-book as well as a translation for children in Japanese hospitals. Saltzman is finalizing details for a third annual tennis doubles fundraiser July 11 at Alta Vista Park in Redondo Beach.

At a recent visit to Metro Charter Elementary School in Downtown Los Angeles, a kindergartner undergoing cancer treatment, Nahla Hamilton, said having books and dolls donated in her honor to California Hospital Medical Center was “the best day of my life.”

The Saltzmans have received calls from old classmates of David’s at Yale and Chadwick School, where he was student body president, a popular cartoonist and editor of the school’s annual. His first grade teacher also saw the program, recalling a young David drawing on his assignments and even in his books.

Book orders from Amazon.com and The Jester & Pharley Phund website have been pouring in, as have inquiries from charitable organizations.

For more information about the book or The Jester & Pharley Phund, visit thejester.org or call 310-544-4733.