During the three week read-a-thon, held in honor of classmate Mark San Gabriel, students from Gauer Elementary School kept journals to document their reading. Altogether they read over 300,000 pages. The school, along with The Jon & Darla Fisher Foundation, Simon & June Li and The Meshnick Charitable Family Foundation, donated 35 copies of The Jester Has Lost His Jingle/El Bufón ha perdido su gracia and 35 Jester & Pharley Dolls to the Orange County Ronald McDonald House in Orange, CA, for use with their young patients. 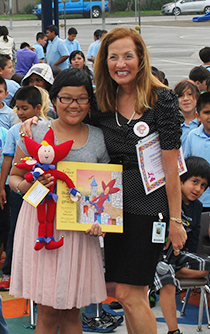 Gauer Elementary School Principal, Dr. Debra Schroeder, hugs Amber Delos Santos following an emotional Jester assembly. The sixth grader, who has been battling cancer since the second grade was recognized for her optimism and friendliness in an Assembly Resolution from Assemblymember Al Muratsuchi. Amber also was presented with a special Certificate of Recognition by Anaheim Mayor Tom Tait.

During a six week read-a-thon, sponsored by the Noble Foundation, Gauer students read 228,245 pages! In Amber’s honor they donated 35 copies of The Jester Has Lost His Jingle/El Bufón ha perdido su gracia and 35 Jester & Pharley Dolls to CHOC Children’s in Orange, CA, for use with their young patients. CHOC’s Amy Frias was delighted to accept the gift on their behalf.