“Hi Barbara, This is Maurice.”

That brief greeting on a Sunday morning in late 1994 was my personal introduction to Maurice Sendak.

I read Sendak’s works endlessly to both my youngest son, David, and his older brother, Michael, when I first discovered the incomparable writer and artist. David loved to draw and tell stories from the time he was little. He especially loved Sendak’s whimsical, wicked and imaginative drawings – whether for the books he wrote or for those he illustrated for others, such as What Do You Say, Dear? 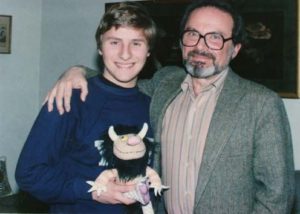 David found Max, Rosie, Little Bear, and other characters drawn by Sendak to be lifelong inspirations for his own artistic creations. We would talk endlessly about the characters Sendak created, how effectively he could convey his thoughts with a few clean lines, his ideas with a few choice words. Of course, none of us ever imagined the vital role that Sendak would later play in David’s own life and work.

David felt so lucky to meet Sendak at a Master’s Tea at Yale University in February 1986, when David was a freshman. He and his brother Michael took turns posing with the reclusive author-artist for pictures taken on a Nikon camera that David loved. After Sendak’s passing in 2012, a Yale classmate remembered watching David and Sendak talking together, writer to writer, artist to artist: “Sendak had just given a presentation and I remember Dave hanging around afterward to get his autograph. The two spoke and laughed and I was just thrilled to be in the presence of two such delightful and talented souls. I’ve long been a huge fan of Sendak’s work, but in my mind Dave always understood Sendak best.”

Sendak must have thought so, too: He invited David to visit his studio in Connecticut. A couple of days later, David and a friend took the train to Litchfield, where, in the middle of the woods, the two were transported to the Wild Things’ world. Sendak showed him where he lived, where he worked, where he displayed his collection of Disneyana and talked about what it was like to be an artist and author. That day changed David’s life.

That evening, when he returned to Yale, David called: “Now I know what I want to do,” he told me, recounting that indescribable afternoon. “I want to be a children’s book artist and author and live in the middle of the woods and have a studio filled with light, just like Mr. Sendak’s.”

Three years later, David’s dream started to gel when he joined a summer study group taking him to ancient Greek sites. Grecian mythological figures and lore entranced him. One day as he entered his class, David told a silly joke and nobody laughed, or even said hello to him. He doodled a few squiggles and thought the result looked like a little jester. Next to the sad face, he wrote the words: “The jester has lost his jingle.” And thus the germ of an idea for a children’s book – in rhyming verse – about the healing nature of laughter began.

In September 1988, The Jester Has Lost His Jingle became David’s senior project in both English and art.

Just a month later, he was diagnosed with cancer, but he stayed at Yale to be with his friends while he was treated. And he continued work on The Jester – a consuming focus – through treatment and remission and on to graduation in May 1989.

He came home to California and continued working on the project – through a relapse and further treatment until his death, at 22, on March 2, 1990.

We promised David that – whatever happened – his book would live.

But agents and publishers told us it would be too expensive to produce 64 pages in full color, in hardcover with a dust jacket, as David had envisioned. And besides, they said, rhyme wasn’t selling that year and they’d have to get David’s rhyme “translated” into prose. David wanted his book produced with the same quality he had admired in all of his hero Sendak’s books. Our family vowed not to let him down. 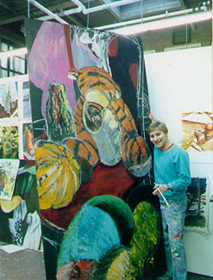 We finally took out an equity line of credit to publish the book ourselves, and I decided to impose on Sendak to bolster David’s legacy. In November 1994, I sent a prototype of The Jester Has Lost His Jingle to Sendak. He had a reputation as a curmudgeon, so I tried to make it easy – I shipped the prototype of the book along with a letter and picture of David and Sendak taken at the Master’s Tea. And I included a self-addressed, pre-paid FedEx package for him to return the book.

I half-expected it to come back unopened. It had been eight years since their meeting – how could Maurice Sendak possibly remember David among the legions of his fans?

And then the phone call came.

“Barbara, I was so surprised to receive your package,” Sendak said, to my disbelief. “I remember David very well. I had no idea David was so ill and was devastated to learn that he had died. I was afraid to open the book, because I was afraid I might not like it, and if I didn’t like it I wouldn’t be able to say anything good about it.”

‘I wish I could have helped him when he was alive. He was very talented.

But I will do whatever I can to help him now.’

“My brother Jack has been very ill with cancer,” Sendak said. “I don’t know how David went through what he did and produced such a strong work. I wish I had known and I wish I could have helped him when he was alive. He was very talented.  But I will do whatever I can to help him now.”

He asked what he could do. I told him that if he could write a few words about David and the book, it would tell everyone that this was a valuable, serious work of children’s literature, not a vanity project. “I’m honored to do that,” he said. “Please tell me, how much can I write?” 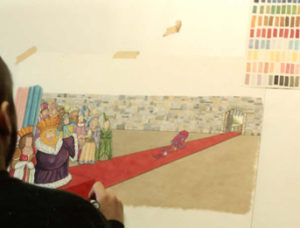 In January 1995, Sendak called me at my office precisely the day his remarks were due. “Hi, Barbara, I’ve written a few words …. The problem is I have no way to get them to you. I don’t have a secretary.”

“Please, I’d be honored to have you dictate them to me,” I said.

For the next half hour, Maurice Sendak dictated the words I have repeated in countless readings of The Jester Has Lost His Jingle. I cried as I typed, and I could tell he was crying, too.

“Our lives briefly touched,” Sendak began. “But I remember him among all the eager, talented young people I’ve bumped into along the way. I remember the face – the enthusiasm – the intelligence and unaffected extraordinariness of David Saltzman. It is difficult to remember all the bright, promising youngsters. It is easy to remember David.”

When the book was introduced at the American Booksellers Association convention in Chicago that May, David’s byline was rendered, just as Maurice Sendak’s always was: “Story and Pictures by David Saltzman.”  Just below that, the cover said, “With an Afterword by Maurice Sendak.”

Across the top of our small booth – tucked in the farthest corner of the immense Chicago convention center – we displayed the last sentence of Sendak’s Afterword across a vivid 10-foot banner: “David’s Jester soars with life.”

On the first day of the convention, when I had stepped away briefly, a man came by, looked at the banner and snapped at David’s father Joe, a professor of journalism at the Annenberg School for Communication and Journalism in Los Angeles: “You can’t quote anything from Maurice Sendak. You don’t have permission to do that. I’m Maurice Sendak’s agent and everything with Mr. Sendak’s name goes through me.”

Joe explained that we had actually gone directly through Maurice Sendak.

“We’ll see about that,” he said and stormed away. He came back, chagrined, a little later and told Joe, “I apologize. I just spoke to Maurice and he said he did write the Afterword and gave you permission to use his name on the cover of the book. He has never done that before. But you definitely have his permission. I wish you the best of luck.”

‘The book is absolutely beautiful!

You have done full justice to the work.

The varieties of colors and tones!

Without Sendak’s support, encouragement, and incredible generosity, The Jester would have been dismissed out of hand by the entire publishing community – distributors, wholesalers, booksellers, media. Instead, The Jester Has Lost His Jingle reached the New York Times best-seller list.

In June 1995, when we returned home from the convention, a hand-written note awaited us on The Night Kitchen stationery:

The book is absolutely beautiful! You have done full justice to the work. The varieties of colors and tones! Rich – fresh and lovely. Mazel tov. I am just embroiled in the printing of a new book so I am very sensitive to the difficulties you’ve wonderfully overcome.