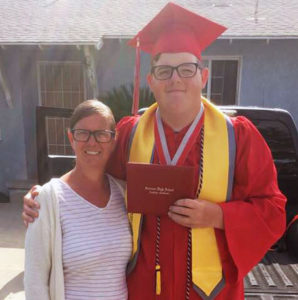 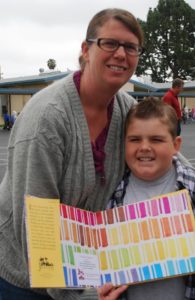 Autumn and I met in 2012 following our literacy and outreach program at Disney Elementary in Anaheim, CA. After I presented the assemblies, I found an email from Autumn awaiting me. She told me that her son Jack, a 10-year-old fourth grader “had always kept his medical issues private” because he was “scared that he would have absolutely no friends if everyone knew he was ‘different.’” Jack told his mom that I had shared my late son David’s story The Jester Has Lost His Jingle, and that it was so uplifting and heartwarming. But he felt “horrible and sad” for me because David had died.

When we talked, I suggested that the Disney Dragons might like to hold our Jester Read-A-Thon in Jack’s honor. He told his mom that keeping his secret was “exhausting” and he didn’t want to keep it private any longer. When Jack was recognized at the final Jester assembly as a “warrior” in his fight against cancer, many fellow students approached him to say how proud they were of him. “It was AMAZING!!” Autumn said. “It was as though a giant weight was lifted from him.”

The experience was life-transforming. Today, Jack is ready for college, graduating high school as a stellar student, coping with whatever challenges come his way with optimism and determination. 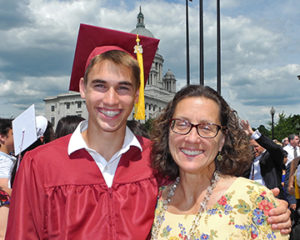 Wendy and I have never met, but we have talked at length by phone and email. As a high school student, Neil participated in a New England summer project called the Student Leadership Training Program. Both the SLTP and The Jester Has Lost His Jingle sprang into the world about the same time and The Jester became a core component of SLTP’s program.

Neil became a strong advocate for The Jester, realizing how much its message of hope and laughter could help ill kids. He read the book to elementary students, began Jester read-a-thons in his hometown of East Greenwich, RI, and urged other students to join him in getting The Jester to hospitalized children.

Then, not long after beginning Northeastern University, he was diagnosed with DIPG, a rare brain stem tumor. After fighting with the FDA to get permission for a not-yet approved treatment for his inoperable tumor, Neil passed away. His mother never left his side. On May 8, he would have celebrated his 24th birthday.

Neil asked that donations in his memory be made to The Jester & Pharley Phund to bring Jester books and dolls to seriously ill children. His mom has been a strong advocate for “Right to Try” legislation that prevents the government from stopping those diagnosed with terminal illness to receive experimental drug treatments.